The adventurers, Halmir and Caranthir, had spent the last winter in the warm hospitality of Woodland Hall.  Upon a fine spring day they emerged to walk around the settlement.  While enjoying the first warm days of the year, their thoughts turned to the summer’s adventuring and then they were approached by a succession of people who knew these adventurers (mostly by reputation) and asked them for help with various endeavors.

Side Note:  I handled this kind of badly.  I had several quest hooks and wanted the players to have a chance to follow any of them, but it seemed strange for a bunch of people to all ask them for help with stuff.  I’ll be taking this into account in the next adventure and spreading the quest hooks out more.

After hearing requests to go to various regions of Wilderland, the adventurers decided to help out a merchant they met.  It seems that he is a member of the Merchant’s Guild in Lake-Town and he makes a trip every autumn through the lands of the Wood-Elves in northern Mirkwood, the Beornings (people who live between the western border of Mirkwood and the Misty Mountains, and follow the lifestyle of Beorn the Skin-Changer) and the Woodmen in the southwestern edges of Mirkwood.  He spends the winter at Woodland Hall, then returns in the spring.

He explains to the adventurers that this route works fairly well for him, but the Merchant’s Guild is interested in opening new trading routes and territories.  To that end, he asks the players to explore the Old Forest Road.  He tells them that the road is considered very dangerous and no one has traveled it in recent memory, but if it could be used by merchant caravans, the Guild could build an outpost at the eastern end of the road where it meets the Running River.  The merchants of Lake-Town and Dale could then use the new route to bring goods more easily to the southern and western reaches of Wilderland, as well as opening new trading routes further south.  This represents a potentially lucrative opportunity for the Guild, so he offers them a substantial reward if the road can be opened.  If they can reach the end of the road, they should follow the river north to Lake-town and give his emblem to someone the guild-hall and claim the reward.  If the road is impassable, they should return to Woodland Hall and receive a somewhat smaller payment from him for their effort.

Side Note!  Money in The One Ring is somewhat abstract.  Rather than talking about specific numbers and denominations of coins or whatever, the rules use “treasure.”  Treasure refers to any sorts of valuables that could be bartered or traded, and there is a chart in the books explaining what impact each point of treasure could have on a character’s lifestyle, or what could be bought with it.  The reward offered here was 2 points of treasure for a successful journey, which is enough for one person to remain at a wealthy standard of living for one month.  Not an absurdly huge amount, but certainly generous all the same. 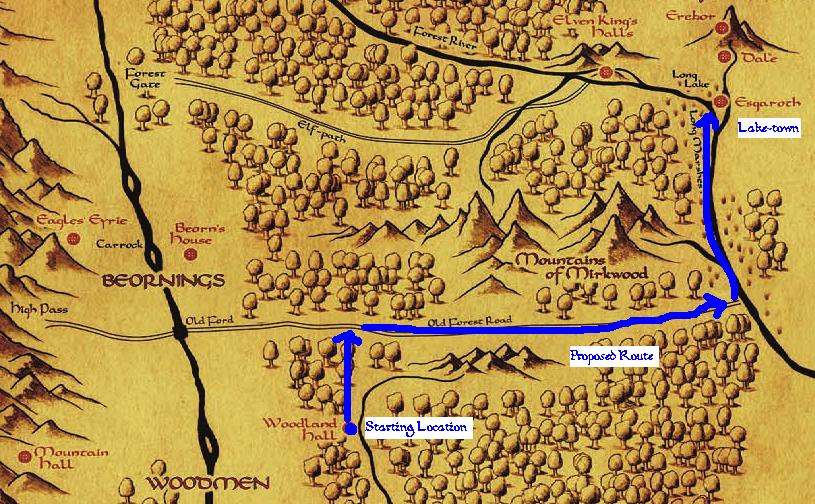 The route proposed for this journey.

After finishing their preparations, Caranthir and Halmir set out northward.  Several days of travel pass, and they find the going difficult.  They get lost for two days, and begin to run low on supplies.  Fortunately, Halmir is able to hunt and the adventurers gather enough food to continue the journey.  One tiring week after they set out, they reach the Old Forest Road (see map.)

Now they begin a part of the journey that is both easier and harder.  Easier because the road will allow them to make much better time, and harder because of the dangerous reputation of this area and the gloomy forest that weighs heavily on their spirits.  The next ten days pass without notable incident.  The road is visible, but nearly overtaken by the forest.  It can still be used, however, and speeds their traveling considerably.  More attempts are made to hunt, but with less success.  The adventurers are somehow able to scrape together enough food to keep them going, so they continue.

The worst if before them, though.  On the seventeenth night of the trip, Caranthir is standing watch when he spots movement just beyond the ring of light cast by their small fire.  (Caranthir is a Wood-elf and benefits from a bonus to actions taken at night or underground.)  He wakes Halmir with a warning, but when it realizes that it has been spotted, the Great Spider attacks with tremendous speed (a Great Spider is a larger and more powerful version of the ones Bilbo faced.)  It hoped to catch them off guard, but hopes to overwhelm them quickly.  (Neither side achieved Surprise, so the battle begins with the adventurers on the defensive and not able to launch an initial ranged volley.)  Halmir rushes the spider with his long-hafted axe while Caranthir hangs back, hoping his bow will give him an advantage.  Both sides trade staggering blows, but no combatants suffer any serious wounds.  Suddenly, the spider turns its horrifying face, eyes gleaming with a hateful light, upon Caranthir.  Suddenly looking into this remnant of the terrible evil that spawned these spiders, Caranthir feels his limbs go numb and he is frozen there by its fell gaze for what seems an eternity.  (The spider used Dreadful Spells — Holding and Caranthir bombed his roll to resist Shadow.  He cannot act for the next 7 or 8 combat rounds.  In game terms, that practically is an eternity.)  Fortunately, Halmir has not ceased his attacks.  Within a short time he has battered the spider into submission and killed it.  The adventurers spend the rest of the night in peace, and then continue on their journey.

As they walk along the road, they sense the already dark forest grow darker still.  It is not merely a dimming of the sun, but the oppression of a malevolent will.  Each day seems to move more slowly and the trees crowd more closely down upon the road.  The shadow presses on them for six days until they finally emerge into  sunlight on the east side of Mirkwood, and all the darkness of the forest washes from their minds.  (Traveling through Blighted Places can have long-term negative affects on a person’s spirit, in the form of Shadow Points.  Caranthir received one  in the battle with the spider, but both adventurers were able to avoid gaining any while traveling.)

Halmir and Caranthir reach the river, and briefly debate whether to continue on foot, or build a raft.  After considering that they would have to travel against the current, they decide to walk.  Another week later, they arrive at the gates of Lake-town.  They enter the Merchant’s Guild-Hall and approach one finely dressed man standing there.  After hearing their business, and receiving the token they were given by the merchant, he asks what they have determined.  The adventurers decide to give a favorable report of the road’s condition.  They claim that, though not entirely safe, the road is passable and a caravan would not face significant threat from forest creatures and such.  The Guild representative is skeptical, but they receive their promised rewards as well as tokens marking them as friends of the Guild.  They then resolve to rest for a time before continuing their adventures.

Okay, so that didn’t turn out how I wanted.  They should have faced more threats on the road, and been more forthcoming to the Guild representative.  I let them get away with it this time, but I’m quite taken with the idea that actions have consequences…

About the tokens they got:  I made them up on the spot.  The idea is that they can show these tokens to get aid from members of the Guild, and more easily gain audience with the various authority figures in the area.  Having legitimacy as representatives of the Guild will usually be better than being no-name mercenaries.

I don’t know when the adventures will continue, but I want to keep posting them here for the entertainment of all.