After long delays, we return to Elite Force 2.  Now, we start to see a little more of what the game is like.

I apologize for the unreadable subtitles.  They look fine in my source video, but Youtube makes a hash of them when I upload.  I’m still trying to find a good balance between quality and file size for my uploads.

The Borg level is essentially an introduction to the game.  I would even call it a tutorial, except that the game already has a tutorial (which I skipped.)  The combat is very easy, with the only enemies being slow-moving and mostly using close-range attacks.  The health and weapon energy dispensers are plentiful, and will slowly recharge if they are depleted.  As far as I know, this happens nowhere else in the game.

I should take this opportunity to give a brief overview of the major characters that were carried over from the last game. 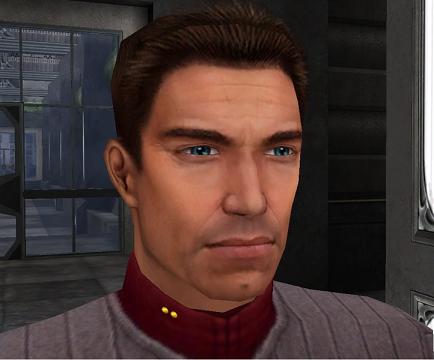 Position: Hazard Team Second in Command (During the events of the game, he received a promotion and assignment as the leader of the Hazard Team.)

Psychological Analysis: Ensign Munro is a stable individual and is an excellent prospect for second command of the Hazard Team.  In addition, Munro has demonstrated a surprising grasp of logic for a human, by devising clever improvised solutions to obstacles during several field missions. 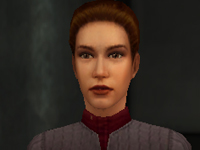 Skills: Telsia Murphy has consistently logged the highest scores in weapon accuracy training exercises.  She is proficient with many weapons and an expert with long-range projectile weapons.  The team will undoubtedly encounter situations requiring the talents of a sniper, and Telsia Murphy is the most logical choice to fill this position.  (Note: I actually don’t recall any time in the game when sniping was entirely necessary or when Telsia’s long-range skills were shown.  Tuvok is apparently full of crap.)

Psychological Analysis:  Telsia has demonstrated a near Vulcan mastery over fear.  She is a stable crewmember who will make a valuable addition to the Hazard Team.

Psychological Analysis:  Crewman Chell is a Bolian pacifist who would rather pursue journals of alien culture and technology than train with weapons.  I have noticed that Chell will shy away from combat situations, and may take cover and refuse to fire in some circumstances.  His preoccupation with alien technology and machinery also has the potential to cause problems — I have observed Chell tinker with devices beyond his understanding, sometimes unleashing undesirable effects.  Against difficult opposition, Chell’s nervous nature causes him to be overly cautious and pessimistic.  (Note:  As far as I know, Chell has the distinction of being the only member of the team who has also appeared on the show.  I actually like Chell a lot, but I can understand that his personality can be grating for some players.)

Psychological Analysis:  Although he is generally liked by most of the crew, I have noted that he speaks only when addressed or when absolutely necessary.  Although not uncommon for a Vulcan, this behavior is considered somewhat anti-social by most humans.  I attribute this behavior to a pure dedication to his study of demolitions, which is not generally regarded by humans as a social activity.  (Why should that be the reason, Tuvok?  Maybe he’s just introverted.)