When we last saw our heroes, they had traveled the Old Forest Road and spent several weeks enjoying the sights of Lake-Town (Esgaroth).  Upon one fine mid-summer morning they were in the markets, buying traveling gear of fine make.  As they were leaving, they chanced to hear a conversation between a dwarf and one of the passers-by.  It seems the dwarf, Nár, had traveled to Erabor (the Lonely Mountain) with a great many other dwarves of the Iron Hills after the defeat of Smaug.  He left a brother, Svior, in one of the dwarven-towns there and greatly desires to hear news of his people.  His job in the mountain smithing-halls prevents him from making the trip himself, but he has prepared a small bundle of gifts for his brother.  Caranthir and Halmir (our heroes!) can see that the bundle contains an ordinary-looking axe of dwarf-make and a variety or trinkets and childrens’ toys.

Intrigued by this dwarf’s story, Caranthir and Halmir approach Nár and ask him for more details.  He explains that he merely wishes for someone to travel to the Iron Hills and deliver the bundle to his brother, then return with news of his folk there.  He is not wealthy, but the Kingdom Under the Mountain produces enough riches that no craftsman there is without a fair wage.  He can pay each of the adventurers 10 silver pennies.  (The Lake-Town sourcebook contains many optional new rules, one of which is a more common way of dealing with money.  Each point of Treasure in the old abstract system is equal to 1 gold piece or 20 silver pennies or 240 copper coins.  Nár is essentially offering 1 point of treasure to split between them.)

The adventurers set out after making their preparations.  After some deliberation, they decide that the direct route would be best.  Though they would need to pass through the Upper Marshes, the way would be less perilous than the Wastes to the north. 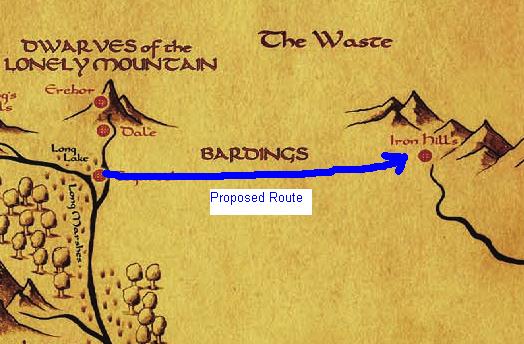 The proposed route takes them through the northern reaches of the marshland.

After a few uneventful, though unpleasant days of travel into the marshes, the heroes begin to sense that they are not alone.  At night, they hear unsettling noises and see strange lights in the darkness.  Still, their unceasing watchfulness seems to keep trouble away from them.  During the day, they find the path wearisome.  The summer sun beats down on them, and they are often forced to walk through shallow water and uncertain ground.  Swarms of flies follow them for miles.  Almost a week pass like this until the adventurers are forced to spend one night in the midst of a vast field of deep murky pools.  The water ripples and reeds nearly as tall as a man sway in a wind no one can feel.  As with every other night, a watch is set.  In the deep hours of the night, as the watchman’s attention is flagging, four hideous shrieking creatures leap out of the darkness.  Fortunately the heroes see them in time to ready themselves. 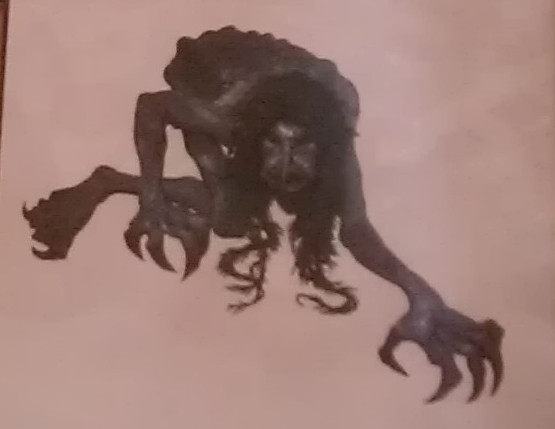 A marsh-hag picture from the Lake-town sourcebook.

Halmir and his faithful pet hound (which apparently only exists when we need it) rush forward to engage the marsh-hags in hand-to-hand combat, while Caranthir hangs back to use his bow.  His elven sight cancels out the disadvantage he would otherwise suffer in the darkness, allowing him to land a couple of good shots.  Halmir fairs more badly.  One marsh-hag grabs him (which gives him some penalties to his next attack and defense rolls) and he receives some painful gashes from the creatures’ claws.  One creature, noticing Caranthir’s arrows, leaps to attack him.  He is able to fight it off and kill it while Halmir kills the one that grabbed him.  Together, the heroes finish off a third marsh-hag and the last one, suddenly realizing that it is alone, leaps away and vanishes into the night.  The adventurers spend the rest of the night trying to rest, while keeping an eye out for further attack.

Side Note:  This battle had some tense moments.  I wasn’t sure how many enemies my players could defeat, and while they didn’t receive any serious wounds, they were tiring quickly.

Thankfully, the journey is almost over.  After several more days, they arrive in Svior’s village and ask some of the locals for directions to his house.  This village is a strange sight to the Elf and Woodman.  It is not build from lumber or thatching, but from stone.  Some buildings are crude while others are elaborate, and others appear perfunctory and must extend much further below ground than above it.  The most striking thing about the village, though, is how empty it is.  So many of Durin’s folk have gone to live under the mountain that few remain in the Iron Hills, and fewer still in the outlying villages of that realm.

Svior is initially wary of these strange travelers, but welcomes them warmly once he learns of their mission.  He receives Nár’s gift with great pleasure, and assures Halmir that he is well although times are hard.  (Caranthir, being an elf, decided to let his human companion do the talking.)  Svior, when asked about the return journey, says that a group of dwarves will be traveling to Erabor in a week.  The adventurers can go with them, and should ask the town leaders for permission to spend the week in one of the abandoned houses.  They do, and a week later they bid farewell to Svior and travel to Erabor.  There they meet Nár and deliver Svior’s thanks and his message.  Nár is relieved that his brother is well, but worried about his report of difficult harvests.  Once paid, Caranthir and Halmir decide to spend some time seeing the dwarven-stronghold, and then return to Lake-town for the Dragontide festival.