When we last saw our heroes, they had traveled the Old Forest Road and spent several weeks enjoying the sights of Lake-Town (Esgaroth).  Upon one fine mid-summer morning they were in the markets, buying traveling gear of fine make.  As they were leaving, they chanced to hear a conversation between a dwarf and one of the passers-by.  It seems the dwarf, Nár, had traveled to Erabor (the Lonely Mountain) with a great many other dwarves of the Iron Hills after the defeat of Smaug.  He left a brother, Svior, in one of the dwarven-towns there and greatly desires to hear news of his people.  His job in the mountain smithing-halls prevents him from making the trip himself, but he has prepared a small bundle of gifts for his brother.  Caranthir and Halmir (our heroes!) can see that the bundle contains an ordinary-looking axe of dwarf-make and a variety or trinkets and childrens’ toys.

END_OF_DOCUMENT_TOKEN_TO_BE_REPLACED

I’ve been spending the last few months trying to clear out my game backlog.  A few days ago, I finished Company of Heroes, which I had picked up in a Steam sale for some obscenely low price.  Company of Heroes is a real-time strategy game set in the hotly-contested regions of France following the Normandy Invasion in World War II. 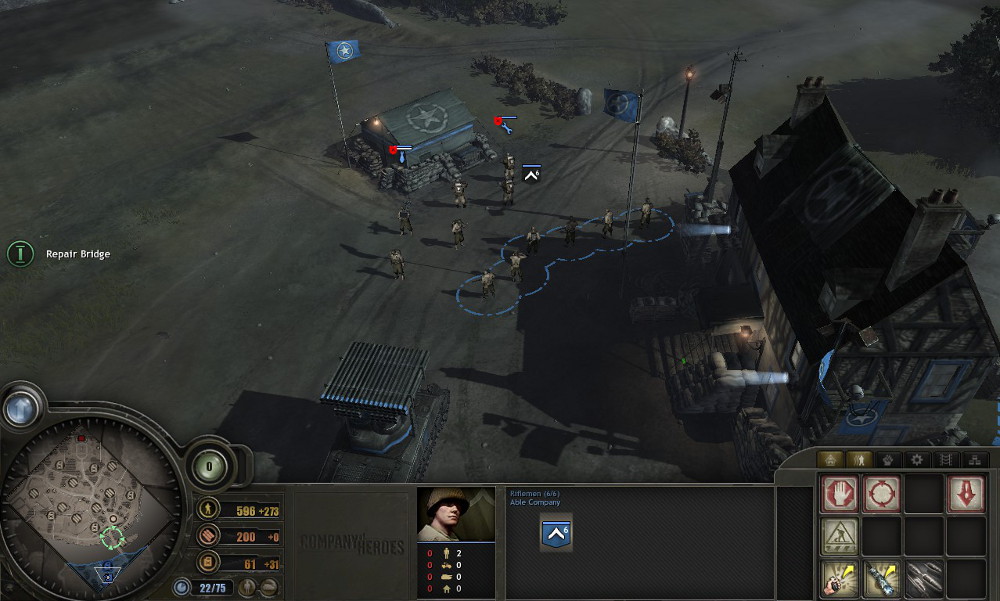 Some of my troops standing next to the field command center.

END_OF_DOCUMENT_TOKEN_TO_BE_REPLACED

My viewer has spoken! We tell Telsia it isn’t working out. Don’t worry, though. I’m sure someone else will come along.

This episode presents a lot of things to talk about. I’ll start with the voice acting. A lot of the voice acting in this game is really really bad. One needs only to look at Telsia’s flat delivery in the first part of this episode, or Korban’s over-exaggerated annunciation that sounds like someone kept telling the voice actor, “No no no, more Klingon!” (I do still get a chuckle out of how…enthusiastic he is when describing the new weapon.)

END_OF_DOCUMENT_TOKEN_TO_BE_REPLACED

The One Ring is a tabletop role-playing game that was developed by Cubicle 7 and Sophisticated Games, and was released in October 2011.  I don’t know this for sure, but I always assumed it was supposed to be released shortly before the premier of The Hobbit: An Unexpected Journey, but then that was delayed a year.  In any case, the game is not a tie-in to the movie, and is based solely on the book, with original artwork and none of the bad decisions that annoy me about the movie.  (I don’t have much to say about the movie right now, but later…?)

This is not a review of the game, or an advertisement for it, though it is great and you should buy it.  No, this is about some of the reasons I love RPG’s, using one of my favorite games as an example.

END_OF_DOCUMENT_TOKEN_TO_BE_REPLACED

And now, the connection this game had to the Voyager series is pretty much over. We are headed for new, better things!
END_OF_DOCUMENT_TOKEN_TO_BE_REPLACED

END_OF_DOCUMENT_TOKEN_TO_BE_REPLACED

It is now time to continue our adventures in tasty-snack-making!  This time, I decided to make something I had actually done before, which is baklava.  Baklava is actually quite simple to make if you can buy phyllo (or filo, or fillo) dough, though it can still be time-consuming.

END_OF_DOCUMENT_TOKEN_TO_BE_REPLACED

After long delays, we return to Elite Force 2.  Now, we start to see a little more of what the game is like.

I apologize for the unreadable subtitles.  They look fine in my source video, but Youtube makes a hash of them when I upload.  I’m still trying to find a good balance between quality and file size for my uploads.

For the people who know me personally, it should come as no big surprise that I love Amateur Radio.  I got my General Class license two years ago and I’ve got an MMR-40 in the final stages of construction.  So it was with some excitement that I recently got my hands on this antique single-sideband transceiver.